Perhaps it’s not a coincidence that Belcanto, the most celebrated restaurant in Lisbon, is close to the São Carlos opera house. Decorated with whimsical porcelain plates, the restaurant looks like a stage and its meals are as thrilling as a great opera performance.

Our lunch’s overture was composed of small bites often included in the couvert of traditional restaurants:  tremoços (lupini beans), olives, and a carrot and garlic salad. The presentation was unusual–they were served on top of Portuguese cobblestones. But the real surprise was that they all turned liquid once we bit into them, filling our mouth with explosions of flavor. This culinary prelude was accompanied by Vicentino, a wine from Zambujeira do Mar that left our paletes refreshed with hints of green pepper.

There were more surprises. First, a fake edible stone covered with salmon caviar. Then, crispy chicken skin with corn coriander and liver, a combination that tastes like roasted chicken. Next, a delicious algae cornet filled with tuna served inside a flower pot.

A genial waiter introduced a chorus of breads made from corn, buckwheat, quinoa, and puff pastry. Next came a duet for clams and “lingueirão” (razor clams) accompanied by a 1979 Porta dos Cavaleiros, a velvety red wine from the Dão region produced in the birth year of chef Avillez.

Then the arias started. The first was a Golden Egg–an egg cooked at a low temperature, covered with gold leaf and adorned with threads of fried leek. It arrived with a lively Arinto white wine made by António Maçanita in Pico, a volcanic island in the Azores archipelago.

The second aria was called Ocean Dive: a pristine sea bass (robalo) cooked in sea water with seaweed, “salicórnia” (samphire), razor clams, and mussels. We were still savoring the final chords of this crowd pleaser when a new theme was introduced: a flavorful remake of the bucolic “cozido” that the chef’s grandmother used to prepare with boiled meats and cabbage. It came with a vigorous 2012 Bruto from the Douro region.

The performance reached its climax with another traditional recipe reinvented: the roasted piglet from Bairrada. We don’t know what culinary sorcery was used to produce this perfect combination of crispy skin and juicy roasted meat. All we can tell you is that the result is magical.

A new theme was introduced by a duo of pre-desserts: a raspberry sorbet and an “abade de priscos” pudding. They were followed by a tangerine dream made from frozen juice and filed with tangerine sorbet. Vila Oeira, a rare dessert wine from Carcavelos harmonized with these sweet delights. Coffee and mignardises brought our meal to a blissful finale.

You have to be patient to dine at Belcanto. The restaurant is booked for weeks in advance. But it’s worth the wait to experience such an unforgettable culinary performance.

It is common for writers to imagine new worlds and share them with us. But it is uncommon for chefs to pursue this creative strategy. José Avillez, the Michelin-starred chef of Belcanto, dreamed of an old Lisbon neighborhood where friends gathered to share great food. He imagined timeworn buildings guarded by carved wooden doors with windows adorned by crocheted curtains.

When the space once occupied by the 13th-century Convent of Trindade became available, Avillez seized the opportunity to make his dreams come true. He invited architect Joana Astolfi to design an installation inspired by old building facades, artist Cátia Pessoa to create ceramic sculptures representing fish and vegetables, and painter Henriette Arcelin to produce a large tile panel at the famous Viúva Lamego factory.

The result is a fun atmosphere perfect to enjoy the classics of Portuguese cuisine, refined and, in some cases, reinvented. Bairro do Avillez (Avillez’s neighborhood) has a grocery store (Mercearia) with some of the chef’s favorite products, a tapas bar (Taberna), and a restaurant (Páteo).

In the Taberna, you can eat a wide variety of “petiscos” (the Portuguese word for tapas), from Portuguese prosciutto and sausages, to codfish with cornbread, and roasted piglet.

There’s a wonderful house wine made in collaboration with Quinta do Monte d’Oiro. And there is also a great new line of artisanal beers called Selection 1927.

We told José Avillez that we were impressed to see him take time to welcome the people who walked in to see the new space. He told us that these gestures are important to him: “What makes Portugal unique is the combination of great ingredients and a rich culinary tradition with our warm hospitality.”

Chef José Avillez is a dreamer who makes Lisbon more fun with his gracious demeanor and delicious food. It is a privilege to be in his neighborhood.

Portugal is a country with century-old traditions. But it is also a place where a new generation is creating the future.

Consider the fruits of the Olea europaea, commonly know as olives. If you visit a Portuguese farmers market, you’ll find delicious olives cured in traditional ways. But if you dine at Belcanto, José Avillez’s wonderful restaurant in Lisbon, you’ll be served three invented olives. The first, a spherical olive that explodes in the mouth, is an homage to Avillez’s apprenticeship at elBulli. The second is a delicious black olive in a light crunchy tempura. The third is an inverted dry martini: the liquid is olive juice and the “olive” is a sphere of gin.

Which do you prefer, tradition or modernity? In Portugal you don’t have to choose. 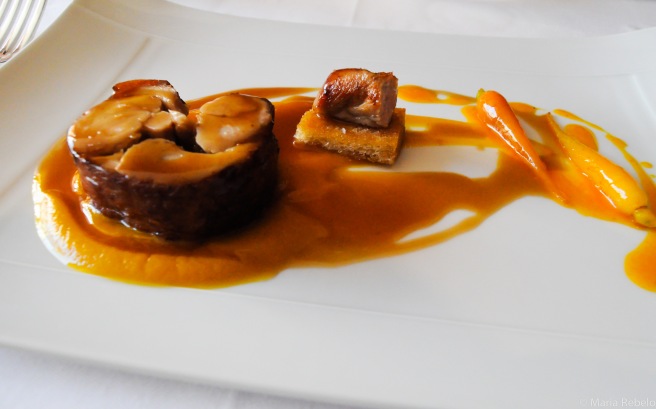 Georg Friedrich Hegel described the evolution of human ideas as involving a thesis, followed by an antithesis, and then by a synthesis that reconciles the two. Believe it or not, these concepts are useful to explain the cuisine of Belcanto, a fantastic Lisbon restaurant owned by chef José Avillez.

The modernist cuisine of restaurants like elBulli is the antithesis of traditional Portuguese cooking. Avillez combines the two in a delicious synthesis that is both familiar and surprising. He serves olives bursting with flavor, golden eggs, seafood immersed in the smell of the sea, manta rays transformed into Pollock paintings.

The Michelin inspectors were so impressed with Avillez’s culinary dialectic that they awarded Belcanto a star. We suspect Hegel would agree.

This small restaurant near Chiado has a funky, bohemian décor that makes it look like a theater set. The servers, all implausibly good looking and articulate, are clearly trained actors.

Chef José Avillez directs this food theater. He has great credentials, having apprenticed with Alain Ducasse and Ferran Adrià. Here he cooks traditional fare with original variations that create new layers of taste.

It is difficult to choose from the menu because everything is so delicious. There is vegetable tempura that is crunchy and crisp, savory partridge turnovers with an intense, gamey flavor, homemade canned tuna with a pungent mayonnaise of ginger and lime, sautéed chicken liver and grapes perfumed with Port wine, and so much more.

When you leave O Cantinho you feel like you’ve just seen a wonderful play that you would love to see again.