There are two ways to reach the fort of Her Lady of the Angels of Paimogo. During low tide, we can walk on the white beach sand while the cool sea waters bathe our feet. We can always go by land, through rolling hills painted with sepia colors that contrast with the shimmering blue of the sea. Either way, the fort awaits us at the end of our journey.

Built in 1674, it maintains its original architecture. It has two spacious rooms on each side of the main door. In the back, a chamber with thick walls and a vaulted ceiling stored ammunition. Side stairs lead to a terrace with magnificent views. In the distance, we see the Berlenga island surrounded by the infinite sea. Below, the bay of Paimogo offers shelter from the storms.

The fort was part of a line of defense that stretched from Cascais to Peniche, protecting the coast against pirates and other aggressors. It was used in 1808 during the Napoleonic invasions and again in 1832 during the civil war that pitched two royal brothers, Pedro and Miguel, against each other. Since then, the fort has retired from military pursuits. It is a peaceful place where we can marvel at the beauty of the land and the splendor of the sea.

The Japanese call it “ma,” the silence between notes that lends musical phrases more meaning. We can hear these same silences on the seashore.

Most of the time the wind blows on the coast, flowing from where the air is cold to where it is warm.  But there are instances in which sea and land have the same temperature, so the wind can rest. In these perfect moments, everything is in balance and at peace.

We’ve been following chef Ana Moura since her spectacular debut at Cave 23 in Lisbon. So, when we heard she had opened a restaurant in Porto Côvo, a fishermen village on the coast of Alentejo, we went on a pilgrimage to see how her cooking has evolved.

Ana called the restaurant Lamelas, after her mother’s family name. The Lamelas have lived in Porto Côvo for generations and Ana spent her childhood summers there.

The restaurant has a beautiful terrace overlooking a small harbor.  It was there that our lunch began, with glasses filled with rosé from a local winery called Herdade da Cebolal. Marta, our genial server, brought small plates with appetizing starters: Alentejo bread with an orange butter made with pork fat and red pepper paste; almece, a local cheese, topped with cured fish; a salad made with hake eggs that were so fresh we felt as if the sea had moved closer to our table.

Marta filled our glasses with a delectable white from Herdade do Cebolal to prepare our palates for the next dish: a luscious abrótea (a local fish) with clams, green sauce, and toasted bread. Next, there was a rice made with robalo (seabass), pargo (snapper), and shrimp. We admired the perfection of the confection, all rice grains perfectly cooked, all flavors in harmony.

Migas, a bread-based preparation, accompanied pork ribs and a purslane salad. It was an explosion of flavor that paired well with the grand reserve red from another local winery, Herdade da Carochinha.

The meal ended with sweetness from a chocolate mousse lightly seasoned with fleur de sel, a cheese cake, and sopa dourada (golden soup).

Throughout the meal, we could see Ana cooking in the kitchen. She was in a state of intense concentration, tasting everything and making last minute adjustments.

We lingered at the table drinking coffee and trying some local brandies made from medronho, waiting for Ana to finish the service. When she came to greet us, we told her that the meal had been unforgettable. She blushed with humility and spoke with passion about her team and the local producers she is working with.

We asked Ana whether there were any other local restaurants we should try. She praised the cooking of many local chefs and we left with a long list of suggestions.

We said our goodbyes and started to research Ana’s list. But we had found an epicurean paradise and it made no sense to leave it. We called Lamelas and made lunch and dinner reservations for the following day. It was an inspired decision. We tried many more gastronomical jewels: a stunning açorda made with sole, magnificent mullets, perfect cuttlefish, delicate abrótea livers, and delicious “carabineiro” shrimps. Just when we thought we had sampled the whole menu, Ana sent something new for us to try: pasteis de massa tenra (turnovers) with a boulliabaisse filling. They were fantastic!

There’s an old Arab tale about someone who travels the world searching for a treasure, only to find it in the courtyard of their childhood home. Ana traveled the world to apprentice in great restaurants. And now, in the beach of her childhood summers, she created a culinary treasure.

In the days before refrigeration, salting was commonly used to preserve fish for future consumption. Codfish has a low fat content, so it does not become rancid when salted. This trait enticed Portuguese fishermen to venture as far as Newfoundland in search of cod. Most of these adventurous fishermen came from a small town in the Aveiro region called Ilhavo.

The captains of the fishing boats moved to Lisbon, the place from where the boats departed. But they kept a vacation home on the banks of the Ria de Aveiro, the waterway  where fresh and sea water mix. These homes are refurbished “palheiros,” the shacks painted with bright stripes where the fisherman used to store their equipment.

Other villages like Mira and Barra once had beautiful rows of palheiros. But these were gradually demolished to build modern homes. In Costa Nova, the traditional architecture was preserved. Large parts of the water-facing Marginal avenue have remained almost unchanged for the past 150 years. It is this postcard view of a time gone by that makes Costa Nova so enchanting. 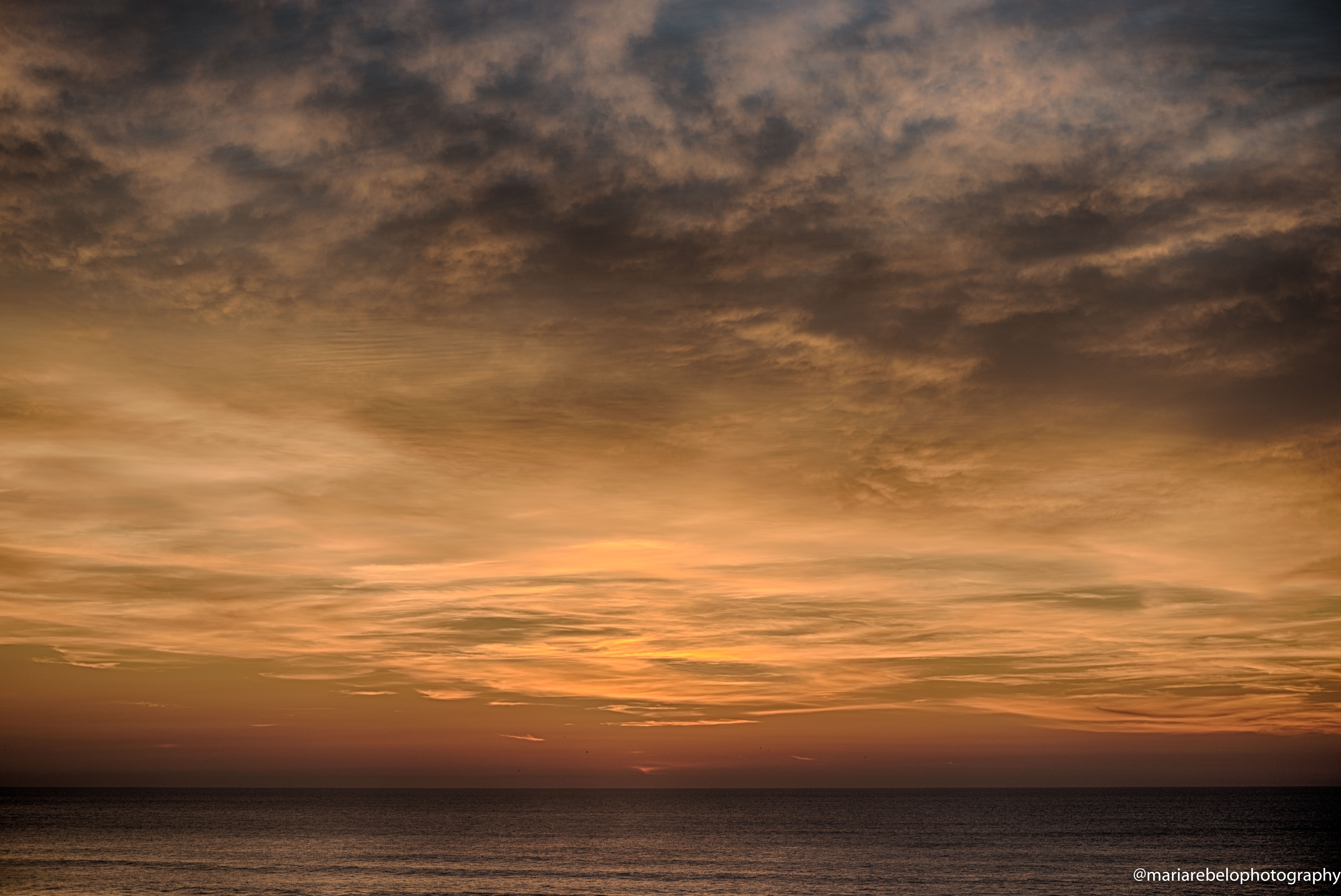 It’s been an unusual Summer. For the wind has been fickle, sometimes blowing hard, other times refusing to show up for work. And we tried to cook with sea water because of a vague remembrance that Marcel Pagnol said that it was the right thing to do if you lived near the sea. Sardines were thin at first but then they gained weight and we could marinate them in olive oil and vinegar with sweet August onions cut in a half-moon shape. It’s been a wonderful Summer!

It is reassuring to know that even the sun is insecure. On our last day in our favorite beach in Portugal, the star staged an unforgettable sunset. It clearly wants us to return next year to worship again its glorious light. How can we say no? 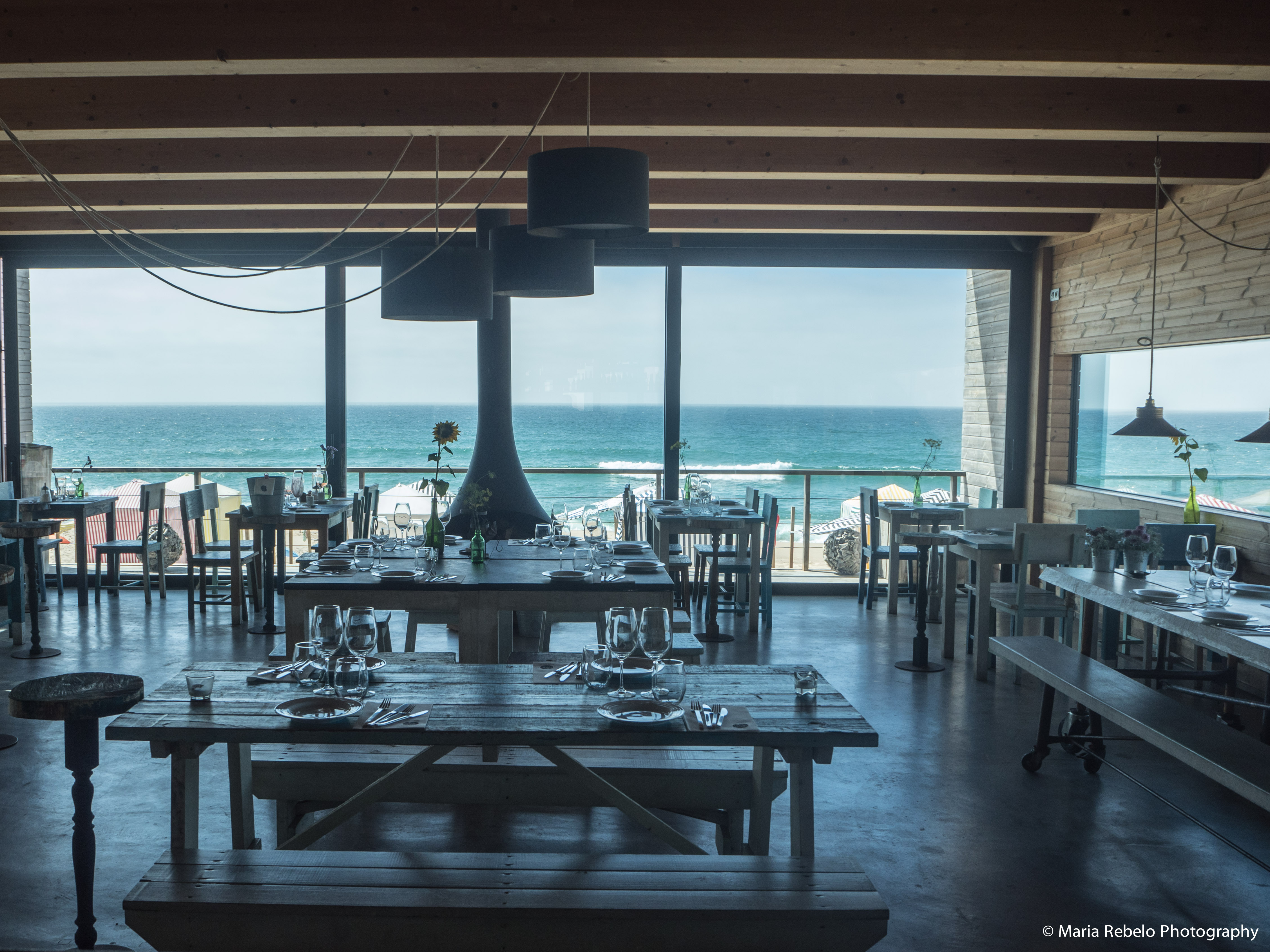 We had a perfect lunch at Noah, a scenic restaurant in the Santa Cruz beach, with very dear old friends. Our table was so close to the sea that it looked like the waves were taking part in our conversation.

The food was simple, grilled sardines and peixe galo (dory) fillets with tomato and pepper rice. A rosé called Pinta Negra produced nearby by Adega Mãe paired perfectly with the fish.

Time flew while we enjoyed the delicious meal, the eternal beauty of the sea and the precious gift of friendship.

Yesterday the elements were tired after so many performances. The wind stayed at home but the waves came, dressed in white linen. The sun was in an orange garb brought from the far east. Seagulls danced to the roar of the waves while the sun kneeled in reverent prayer until the blue curtains were drawn.

Today a new season begins. We wish you a blissful New Year and we hope you’ll come see the spectacle of the sun setting on the Portuguese sea.

Today the waves were sculpted in the whitest marble. And we stood in awe at these precious gifts from the Portuguese sea.

The ocean waves broke one by one

And I was alone with the sand and the foam

Of the sea that was singing just for me.