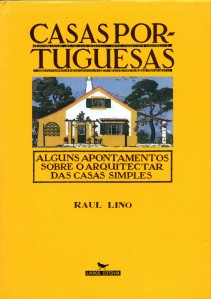 Raul Lino is a Portuguese architect who was influential in the first half of the 20th century. In an era shattered by two World Wars and the Great Depression, Lino craved the stability and permanence that he associated with tradition. He codified this tradition, inherited from the Romans and adapted throughout the centuries, creating the archetypal Portuguese house. Using stone, brick, and terracotta roof tiles, he designed homes that infused the vernacular architecture with proportion and elegance. Some felt that Lino should have looked forward instead of backwards, adopting the modernism of Le Corbusier and Mies van der Rohe. But, by embracing the past, he helped preserve the sense of place that we feel when we see a Portuguese house.

In 1912, Raul Lino built a private residence for his family, the “Casa do Cipreste” in Sintra. It is perched on a hill, overlooking the Sintra Palace. Thanks to the blog of Rui Morais de Sousa, a virtuoso of large-format photography, we can visit this graceful home with just the click of a mouse (here). What a privilege!

2 thoughts on “The Portuguese house”