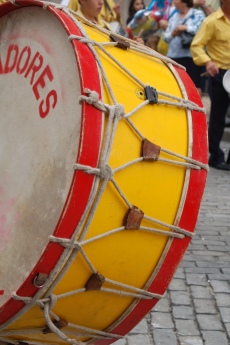 In the 17th century, the Viseu region depended on the waters of the Pavia river to irrigate the farmland and power the watermills. In 1652, after a terrible drought, farmers built dykes that reduced the river flow to a trickle. As a result, the watermills in the village of Vildemoinhos stopped working. The millers clashed with the farmers over water rights until, in 1653, the royal court resolved the case with a verdict favorable to the millers.

To show their appreciation for this life-saving decision, the millers organized a cavalcade called Cavalhada through the city of Viseu. The Cavalhada was so successful that it became an annual event. It is held on June 24 (St. John’s day). Farmers sell pots of wild basil and children feast on Viriatos, a local sweet. There are marching bands, traditional dancing troupes, groups of drummers, and giant paper-machê dolls.

This Cavalhada is one of the many Summer feasts organized everywhere across the country. If you see a sign for Festa Popular (popular feast), be sure to stop by. They’re always fun events. And they celebrate the ancient traditions that make Portugal more than just a pretty landscape.