Blessed are the times when we argue about trivialities, because they are happy times. On Christmas day, there is often a heated debate about which is the best Christmas dessert. The holiday table is crowded with sweet candidates, recipes that wait all year in the pages of timeworn cookbooks for a few moments of fame. Sugar, cinnamon and a little port wine transform humble ingredients like bread, eggs, and pumpkin into culinary feasts. There are rabanadas, a Portuguese version of French toast, “filhóses de abóbora,” fried pumpkin cakes, “coscorões,” fried dough shaped like angel wings, “sonhos,” crispy, airy spheres, and many more.

Why don’t we enjoy these desserts all year round? Because they only taste great when the table is full of friends and family members who gather to celebrate the holiday, enjoy each other’s company, and debate which is the best Christmas dessert.

Portuguese cooks love to alter traditional recipes, adding ingredients that can be difficult to detect but impart a special taste. We recently learned a few of these tricks.

Our fish monger told us that “people always rave about my fish sauces. They don’t know I use a secret ingredient. When no one’s looking, I blend in a tablespoon of Savora mustard. It makes all the difference.”

A saleswoman at Quinta do Sanguinhal confided: “when I roast meat, I use a secret ingredient. When no one’s looking, I pour a glass of “licoroso” (desert wine) on the meat. It gives the sauce an amazing taste.”

The butcher gave us a pretty conventional stew recipe. When we asked him what made the recipe so special, he said, “Well, I use a secret ingredient. When no one’s looking I pour half a beer on the stew. Then, I drink the other half.”

We plan to find out whether these tricks work… when no one’s looking.

Bacalhau (cod) is a fish with a bland taste. But, once it is salted and dried in the sun, it becomes the perfect foil for garlic and olive oil. The Portuguese have enjoyed salted cod for more than two centuries. Lucas Rigaud, chef at the court of D. Maria I, included two cod recipes in his 1780 cookbook.

In 1778, Queen D. Maria eliminated the cod sales tax to help the fisherman and the poor. When the Queen returned from a boat ride on the Tagus river, she was greeted by ships decorated with garlands, overflowing with people cheering to the sound of music and fireworks. D. Maria was so touched, that she did the unthinkable. With tears in her eyes, the Queen sent away her coach and walked unguarded amid the crowd to the royal palace in Terreiro do Paço.

If you’re visiting Portugal, give salted cod a try. There’s something truly unique about food that can bring a distant queen so close to her people.

The squid is a sea socialite, always hopping from shrimp to smelt parties, elegant and glamorous in its pink-dotted design gown. This cephalopod has in recent years become a globe trotter. Every day, billions of squid travel by road, sea and air to the menus of fashionable restaurants around the world. But all this roving takes a toll on the delicate mollusk, which arrives tired and frozen, long on frequent-flyer miles and short on taste.

If you’re in Portugal, don’t miss the chance to try some fresh squid. The best way to cook it is “Algarve style” (lulas à Algarvia):  the squid is lightly fried in olive oil, garlic, and bay leaves. It’s a simple preparation and yet, it produces sublime results that do justice to the squid’s diaphanous freshness.

The village of Alfeizerão, near Nazaré, is famous for its sponge cake. The original recipe came from the Spanish kingdom of Castile, so the cake used to be called Pão de Castela (bread from Castile).  When the Portuguese started trading with Japan, in the 16th century, they introduced it to the residents of the port of Nagasaki. The cake remains popular in Japan, where it is called Castella or Kasutera. In Portugal, the name of the cake changed in the 19th century to Pão de Ló, probably after a cook nicknamed Ló.

Pão de Ló is usually a dry cake, but the nuns of Alcobaça’s Cister Order developed a version that is wonderfully soft and moist. When the religious orders were abolished in the 19th century, the nuns gave their recipe to a family from Alfeizeirão that offered them shelter. Five generations later, the same family still uses this recipe to make Pão de Ló at Casa Ferreira in Alfeizerão.

During a recent visit, we asked our server at Casa Ferreira what makes their cake so special. She answered without hesitation: “we make Pão de Ló the way the angels like it.” We could not confirm the veracity of this claim but, after trying the cake, it struck us as completely plausible.

When you eat octopus in a Portuguese restaurant, it is always tender and delicious. But, when you buy fresh octopus and cook it at home, it often turns into a rubbery disappointment.

Portuguese chefs stage an elaborate disinformation campaign to keep secret their cooking technique. They tell you to cook the octopus with an onion, a cork, or a nail; or leave it in the pot until the water is cold; or cook it in red wine or in red vinegar; or beat it three times on the kitchen counter; or “scare” it by raising it from the boiling water. All these tricks produce inedible, chewy octopus.

So, how do you tenderize this eight-armed mollusk? You freeze the fresh octopus before you cook it! That’s all. But please don’t tell anyone; it’s a secret. 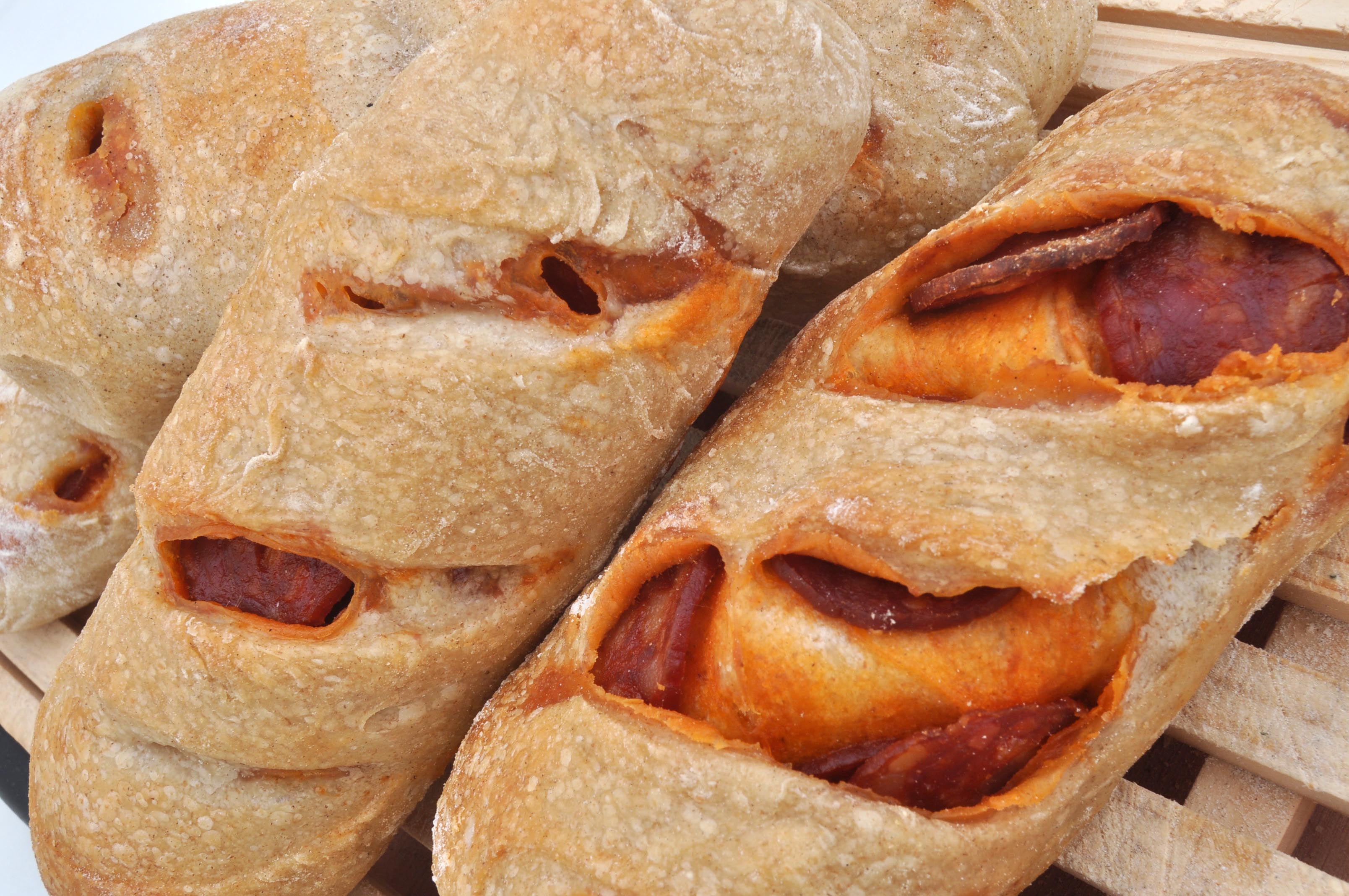 No one recorded the moment of sublime inspiration when an unsung genius thought of taking a delicious “chouriço” (a smoked sausage made of pork marinated in red wine), place it inside bread dough, and cook it in a wood oven. The result is incredible. You can buy chouriço bread at bakeries and fairs. But think twice before you try it: it is wildly addictive.

Many visitors keep returning to Portugal on their vacations. They say they are attracted by the majesty of the cities, the beauty of the countryside, the stunning beaches, the perfect weather, the wine, the food, the hospitality, the culture. But we know they come for one thing only: the chouriço bread.

Lampreia (lamprey) is a very strange fish that, somehow, gained favor with emperors and kings. The Romans included it in banquets prepared for Julius Caesar. The oldest known Portuguese cookbook, a 16th century collection of recipes attributed to Infanta D. Maria, has a single fish recipe that describes how to prepare and cook lamprey.

You don’t have to conquer Gaul or marry royalty to eat lamprey. Many Portuguese restaurants offer this delicacy between January and April. It is usually served stewed, accompanied with rice. You find excellent lamprey at Solar dos Presuntos, a traditional Lisbon restaurant where you can dine like a king.

A cataplana is a copper pan made of two clam shells that can be sealed with a clamp. The origins of this cooking contraption are lost in time. In the early 20th century Portuguese hunters carried cataplanas loaded with onions and tomatoes, so they could cook game on a wood fire. Later, in the 1960s, the cataplana became a popular way to cook fish and shellfish in the Algarve. Since then, it has become a hallmark of Portuguese cooking.

There is something magical about the moment when the waiter brings a cataplana to the table. And it is not hard to imagine that, as he opens the pan, he murmurs the same secret incantation used in the banquets of the Arabian Nights to make the meal unforgettable.

Marcel Proust immortalized the madeleines in his writing. But the French did not change the name of these little cakes to prousteleines or madeleines à la Proust. When Bulhão Pato, a 19th century writer, waxed poetically about a clam dish, the Portuguese named the recipe after him. Ameijoas à Bulhão Pato (clams Bulhão Pato) has become the classic Portuguese clam recipe.

It is easy to prepare: combine olive oil and garlic in a pot; add the clams. Once the clams open, add some chopped coriander and a few squirts of lemon juice.

The recipe is designed to showcase the splendor of the Portuguese clams. You’ll be disappointed if you use this recipe with lesser clams. Order clams Bulhão Pato at a beach-side restaurant and you’ll understand why Bulhão Pato considered them pure poetry.

We found our dream bicycle!