Portuguese restaurant waiters like to give all fish equal opportunity. Ask them about one variety and they’ll tell you that it’s very very fresh and very very good. Ask about another variety, and you’ll hear much the same.

After the waiter sings the praises of all fish on the menu, we usually choose a robalo. This species is known in English as “common snook,” but there’s nothing common about it. The robalo is a voracious, discerning foodie who loves to feast on small crabs. As a result, it has a really unique taste. Try it, and you’ll see that it is very very delicious. 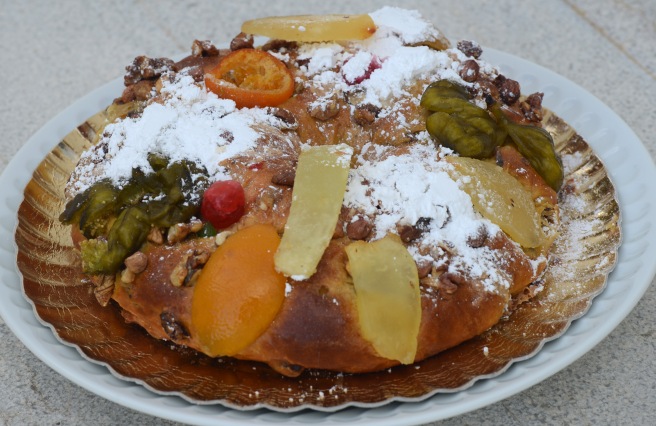 Bolo rei was introduced in Portugal in the second half of the 19th century by Confeitaria Nacional, a pastry store in downtown Lisbon. It was based on France’s “gateaux des rois,” a royal cake forbidden during the French revolution until pastry chefs renamed it the “people’s cake” (gateaux des sans culottes).

Over time, Confeitaria Nacional’s recipe was imitated and adapted, and bolo rei became an integral part of Portuguese culture. So much so that, when the monarchy was abolished in 1910, the Portuguese parliament renamed it Republic’s cake. But the awkward name never caught on.

Pastry stores used to hide two objects inside the cake: a gift (a trinket or, in some cases, a gold coin) and a dried fava bean. The gift has been eliminated but the fava bean is still included. According to tradition, whoever gets it has to buy the next cake.

The custom of hiding a fava bean inside a cake originated in the ancient Roman festival of Saturnalia. The person who found the fava bean became king of the Saturnalia and served as the festival’s master of ceremonies.

If you’re in Portugal during the Christmas season, make sure you try some bolo rei. It’s a sweet piece of European history. 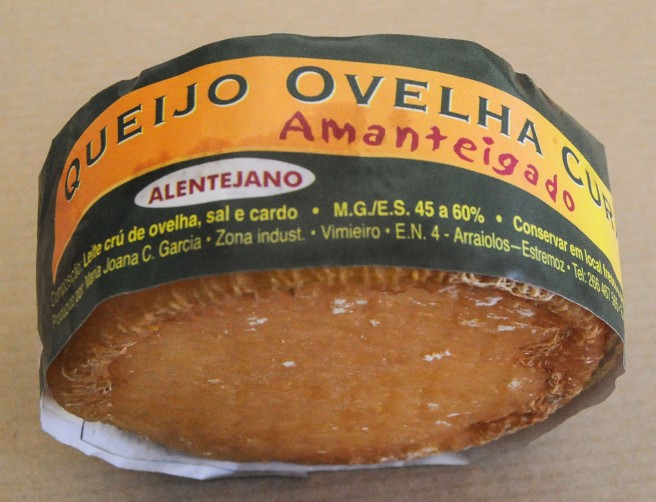 Marcel Proust could vividly recall the taste and smell of his aunt’s madeleines. Those memories inspired his masterpiece, Remembrance of Things Past.

Joana Garcia remembered the taste and smell of the cheese she ate as a child with her grandmother in Alentejo. Those memories inspired her to recreate that long-lost flavor. She quit her job as a lawyer, moved to Alentejo and bought 500 sheep. After trying endless combinations of milk, salt and cardoon, she found the taste of her youth. Garcia’s masterpiece is called Queijo Monte da Vinha. It is a delicious, soft, buttery cheese with the precious taste of a distant past.

You can try Queijo Monte da Vinha at the wonderful Tasca da Esquina restaurant in Lisbon. You can buy it at Mercearia Creativa, a gourmet grocery store where you’ll find many other great Portuguese products (Av. Guerra Junqueiro, 4A, Lisbon, tel. 218-485-198). Click here for the Monte da Vinha website.

The squid is a sea socialite, always hopping from shrimp to smelt parties, elegant and glamorous in its pink-dotted design gown. This cephalopod has in recent years become a globe trotter. Every day, billions of squid travel by road, sea and air to the menus of fashionable restaurants around the world. But all this roving takes a toll on the delicate mollusk, which arrives tired and frozen, long on frequent-flyer miles and short on taste.

If you’re in Portugal, don’t miss the chance to try some fresh squid. The best way to cook it is “Algarve style” (lulas à Algarvia):  the squid is lightly fried in olive oil, garlic, and bay leaves. It’s a simple preparation and yet, it produces sublime results that do justice to the squid’s diaphanous freshness. 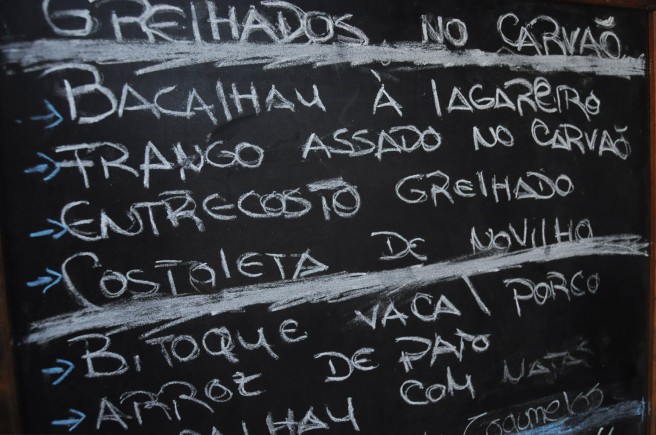 One of the simple pleasures of Portuguese cuisine is roasted chicken with piri-piri, a spicy sauce made with peppers that came originally from Africa.

Frango da Guia, a small roasted chicken, is very popular in the Algarve. But the best roasted chicken we have ever had is from Frango Saloio, a tiny take-out place in the municipal market of the town of Lourinhã, 70 km north of Lisbon. You see no tourists there, only locals who wait while their chicken is cooked to perfection over red-hot coals. Lines can be long during the Summer, so please don’t tell anyone about this place!

Algarve is much more than gorgeous beaches and perfect weather. It is also delicious sweets made with eggs, almonds or figs. The most famous are the Dom Rodrigos. But the prettiest are doces finos (fine sweets) like the ones shown in the photo, made with the wonderful marzipan that only almonds from Algarve can produce. These local treats are one more reason why life in the Algarve is so sweet. 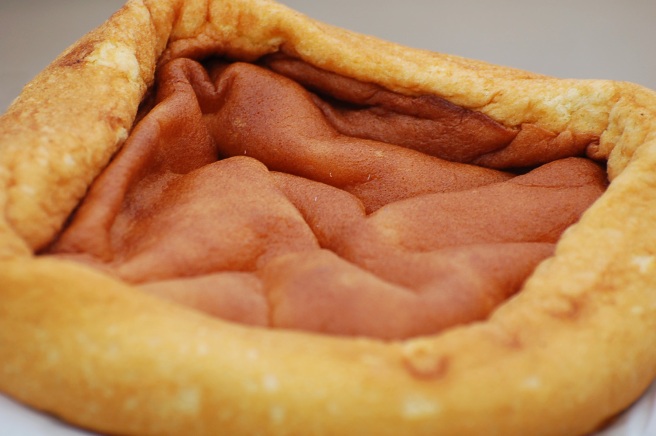 The village of Alfeizerão, near Nazaré, is famous for its sponge cake. The original recipe came from the Spanish kingdom of Castile, so the cake used to be called Pão de Castela (bread from Castile).  When the Portuguese started trading with Japan, in the 16th century, they introduced it to the residents of the port of Nagasaki. The cake remains popular in Japan, where it is called Castella or Kasutera. In Portugal, the name of the cake changed in the 19th century to Pão de Ló, probably after a cook nicknamed Ló.

Pão de Ló is usually a dry cake, but the nuns of Alcobaça’s Cister Order developed a version that is wonderfully soft and moist. When the religious orders were abolished in the 19th century, the nuns gave their recipe to a family from Alfeizeirão that offered them shelter. Five generations later, the same family still uses this recipe to make Pão de Ló at Casa Ferreira in Alfeizerão.

During a recent visit, we asked our server at Casa Ferreira what makes their cake so special. She answered without hesitation: “we make Pão de Ló the way the angels like it.” We could not confirm the veracity of this claim but, after trying the cake, it struck us as completely plausible.

No trip to Portugal is complete without visiting Sintra and no visit to Sintra is complete without eating a travesseiro at Piriquita. Travesseiro means large pillow, and that is what these pastries look like. But, instead of cloth and feathers, these pillows have layers of puff pastry filled with an egg and almond cream.

Despite many attempts, no one has been able to copy these travesseiros since Piriquita first opened its doors to the public in 1952. Some say that fairies sprinkle them with star dust. Others claim to hear sirens singing while they prepare the pastry. All we know is that for us, mere mortals, these heavenly travesseiros are one more reason to go to Sintra.

Piriquita-Antiga Fábrica de Queijadas, Rua Padarias 1/7, Sintra, tel. 219 230 626. Lines can be long in the Summer but, if you go up the street, you’ll find a second Piriquita café with much shorter lines (please don’t tell anyone!). 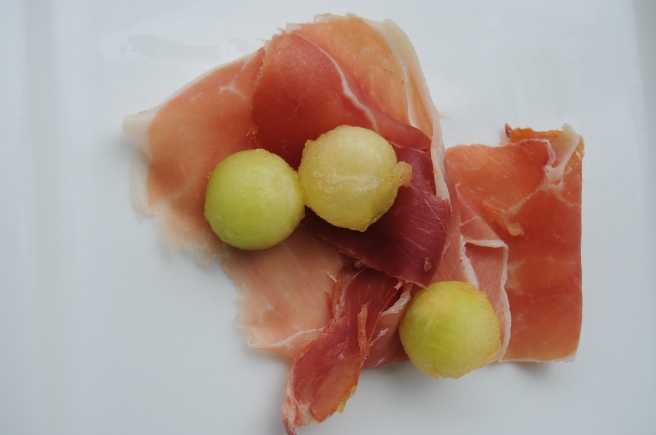 But some pigs are more equal than others. There is a clear hierarchy among Portuguese pigs. The black pig is at the top of the heap. This aristocratic swine feasts on acorns and is often exported to Spain to be turned into Iberian ham. Restaurants use fanciful names to describe cuts from this animal: secretos (secrets), presas (prey), and plumas (feathers).

Next on the social scale, we have the “leitão,” the famous suckling pig that is roasted to perfection in the Bairrada region and served with sparkling wine.

The rank below is occupied by the “porco bísaro,” a pig with big ears that is a cousin of the wild boar. Its tasty meat has made it all the rage in the north of the country.

The normal pig is at the bottom of the snout ladder. But the meat from this humble animal is essential to sublime preparations, such as pork with clams and presunto (Portugal’s version of prosciutto) with melon. It just goes to show that we should ignore social conventions and treat all pigs as equal.

Quince jam (marmelada) is very popular in Portugal. Some people like it freshly made, when it is soft and yellow, while others prefer it aged, when it is hard and dark red. But both factions agree that a slice of buttered bread with marmelada is one of the world’s most simple and satisfying pleasures.

Marmelada is often paired with a slice of queijo da ilha, a cheese from the Azores islands. This combination is so perfect that it is known as “Romeo and Juliet.” Be sure to try it when you visit Portugal!

Below you’ll find a marmelada recipe from a 16th century Portuguese cookbook attributed to Infanta D. Maria. If you find quinces in your local market, bring them home and make some marmelada. There is something very special about cooking from a recipe that is four centuries old.

Use two kilograms of quince and 1.5 kilograms of sugar. Cook the quince in a covered pot of water. Peel the quince, cut it in pieces and strain the pulp through a fine sieve. Combine sugar and water in a pot and make a syrup. Add a little orange-flower water to the syrup. Remove the pot from the heat and combine the strained quince pulp with the syrup. Heat this mixture and stir the marmalade until it no longer sticks to the bottom.