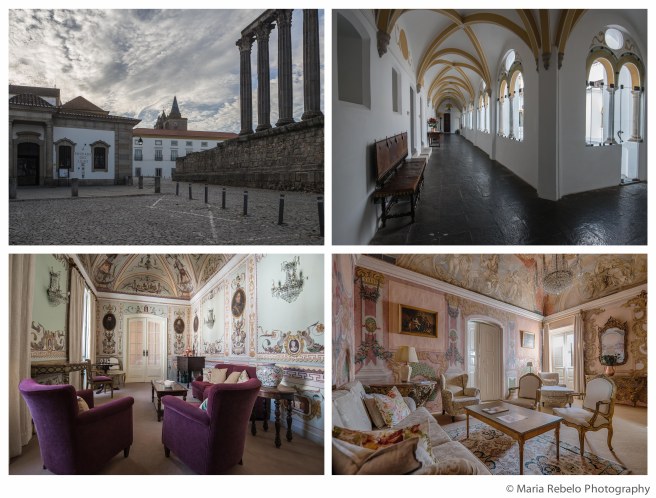 When we entered the Pousada dos Loios in Évora, we stepped on grounds that have seen war and peace, creation and destruction. The Arabs built a castle on this site that was destroyed by fire during the Portuguese war of 1383-85. In 1485, a local noble built a convent for the order of Loios on top of the castle ruins.

The villagers called the members of this order the blue monks because of the color of their robes. These religious men lived an austere life, working and praying in silence. Their serenity and wisdom led the royal family to choose them as confessors.

The convent was severely damaged by the 1755 earthquake and later rebuilt through the efforts of an enterprising priest. In 1834, Portugal abolished religious orders and the convent was closed down.

In 1963, the ancient building was converted into an historical hotel.  The cells of the monks were turned into comfortable rooms and elegant suites. The courtyard became a spacious breakfast room.

The Pousada is in the center of Évora and yet inside its thick stone walls the clatter of the city vanishes. Staying here for a few days felt like a long vacation. We were content and at ease in the convent of the blue monks.

The Pousada dos Loios in Évora is located on Largo do Conde de Vila Flor, tel. 351 266 730 070. Click here for the pousadas’ website and here for a large collection of photos of the hotel.

14 thoughts on “The convent of the blue monks”