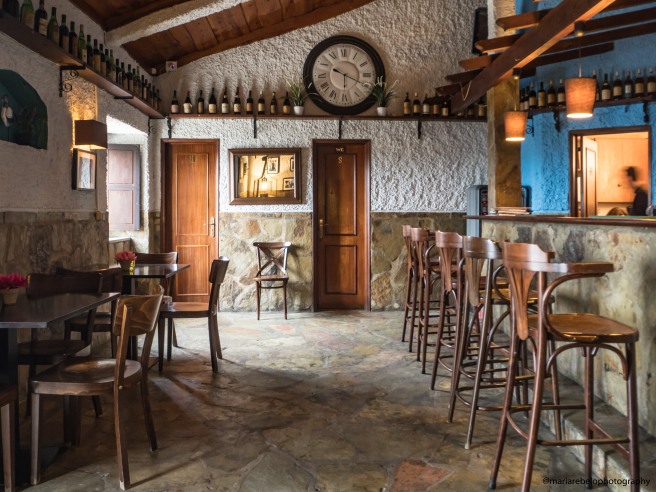 The staff of the pousadas, a network of historical hotels with fabulous locations, has always great restaurant tips, so when they recommended Porto Santana in Alcácer do Sal, we called to make reservations.

The restaurant remounts to the days when people traveled by horse to Alcácer and crossed the Sado river through a small wooden bridge to work in the fields. They left their horses by the restaurant building and came in for a bite before work. Later, the place became a tavern where people enjoyed a glass of wine. Later still, it became a “tasca,” a humble eatery that catered to local residents. The restaurant was purchased more than a decade ago by Dália Soromenho, a chef who learned from her mother the traditional recipes of Alentejo. She modernized the old place but preserved key elements of its past like the stone floor and the straw-padded roof.

Our waiter took us to a cozy table by the fireplace. The other tables were occupied by locals, most of whom seemed to be involved in agriculture. They were giving thanks for the rain that was blessing the fields and talked with excitement about their wines and their crops.

Our meal started with a soup made with clams, spinach and rice. The flavors blended perfectly and the rice grains were firm, so there was no starch from the rice clouding the flavorful broth. The meal continued with fried fillets of “peixe galo” accompanied by an “açorda” made with fish eggs. The fish was delicious, but it had a hard time competing with the magnificent açorda, the best we ever had. It was a culinary masterpiece made with fish broth, fish eggs, bread, olive oil, and garlic. Finally, we tried black pork “secretos” salted and grilled to perfection.

We told our waiter how much we liked our meal. “But you didn’t try our pork and clams Alentejo style, they are really outstanding.” he said in a tone that made us feel like we had gone to Rome and not seen the pope.

We repented and returned the next day to Porto Santana for lunch. We were received by Dália Soromenho who recommended we also try her tomato soup as a prelude to the pork and clams.

The meal started with a couvert composed of bread, olives, a delicious carrot salad seasoned with minced garlic and coriander, and fried sardines in an “escabeche” sauce made from olive oil, bay leaves and vinegar. The tomato soup was great, the acidity of the tomato contrasting with the creamy poached eggs. The pork and clams were indeed spectacular. They have everything that is lacking in ordinary preparations: the pork was succulent, the clams were not overcooked, and the fried potatoes were crisp and delicious. The dessert was a combination of eggs yolks and the famous pine nuts from Alcácer.

Dália sat at our table and asked us what we thought about the meal. We told her that it is people like her that make Portugal a place full of culinary treasures waiting to be discovered.

7 thoughts on “Eating pork and clams in Alcácer do Sal”