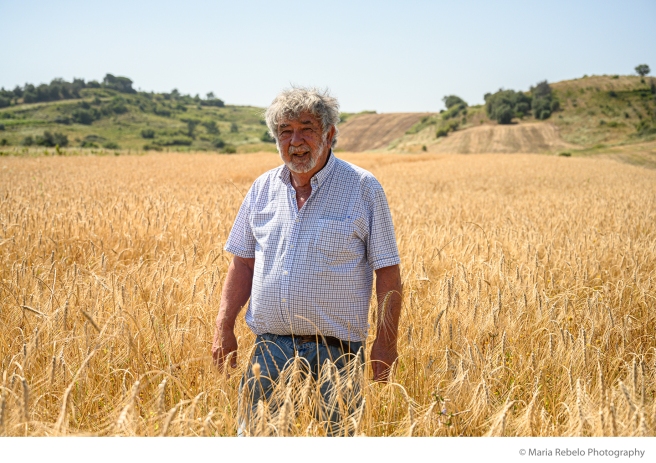 Another wondrous lunch with Adolfo Henriques at Maçussa. A taste of another recipe that almost got lost: “manja,” a combination of bread, potatoes, garlic and olive oil that goes great with grilled sardines.

The meal started with Adolfo’s legendary goat cheeses served with bread made from barbela wheat and a baked mixture of cornbread and olive oil called gaspiada. “I call this one cabrabert,” says Afonso, pointing to a round cheese, proud of his play on the Portuguese word for goat (cabra) and the word camembert. The cheese was followed by a variety of wonderful sausages, codfish liver, gravlax, and figs.

After lunch, Adolfo took us to a field planted with barbela wheat. Barbela is an ancient Egyptian variety abandoned after World War I in favor of wheats that offer larger yields in exchange for less taste and nutrition. “People often choose quantity over quality,” laments Adolfo.  It took him several years to harvest enough wheat to make bread. He grinds his crop in windmills that only process traditional grains, like Valentim da Silva’s Moinho do Boneco at Moita dos Ferreiros and Miguel Nobre’s Moinho de Avis in the Montejunto mountain. The result is the type of flour used a century ago. It that makes a rustic, delicious, nutritious bread.

Adolfo does not use fertilizers or pesticides. After each crop, he lets the field rest for a year so that the soil can recover. Standing in the middle of a field planted with his prized crop, Adolfo smiles and says: “Look at how the wheat dances in the wind.”

2 thoughts on “Ancient wheat, dancing in the wind”