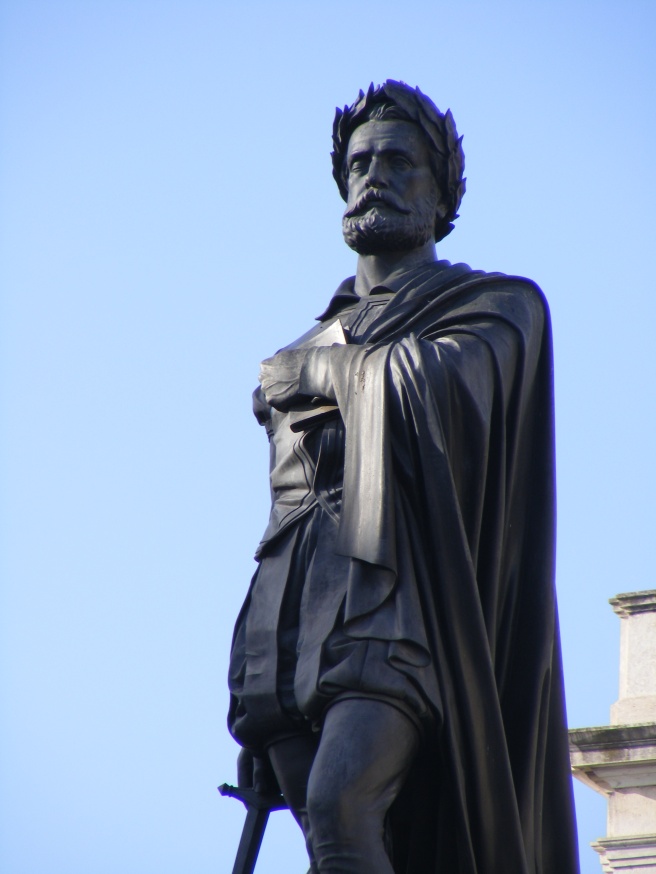 Artists often quip that they have to die before they can make a living. The great 16th century poet Luis de Camões died poor. Here’s how the influential Encyclopedia of Diderot & d’Alembert, published in Paris in 1765, describes his life:

“The famous Camões has done eternal honor to his homeland with his epic poem the Lusíadas. His life and misfortune are well known. Born in Lisbon in 1524 or thereabouts, he took up arms and lost an eye in combat against the Moors. He traveled to the Indies in 1553, offended the Viceroy, and was exiled. He left Goa and took refuge in a deserted corner of the world on the Chinese border. It was there that he composed his poem; the subject is the discovery of a new land of which he himself had been a witness. […]

It is said that he nearly lost this fruit of his genius while traveling to Macau. His ship went down during the crossing, but Camões, imitating Caesar, had the presence of mind to preserve his manuscript by holding it in one hand above the water while he swam with the other. Upon return to Lisbon in 1569, he spent ten unhappy years and finished his life in a hospital in 1579. Such was the fate of the Portuguese Virgil.”

Camões knew from classical Greek literature that there are two choices: to live an ordinary life and be forgotten, or struggle for greatness and have a chance of immortality. The mythical Achilles sacrificed his life at Troy, but his fame lives forever.

Camões gave his life to the Portuguese language. Every year, on June 10, we celebrate his immortality.

The great poet Luís Vaz de Camões published his masterpiece, the Lusíadas, in 1572. In the first part of this epic ode we learn that the fate of Portugal is being decided in Greece. The Greek gods (called by their Roman names) are divided into two parties. Bacchus is the nemesis of Portugal. With the help of Neptune, he sows unexpected obstacles and unending perils on the path of the Portuguese. But Venus takes up the cause of Portugal. And, with her thoughtful help, the Portuguese show that they can accomplish great things.