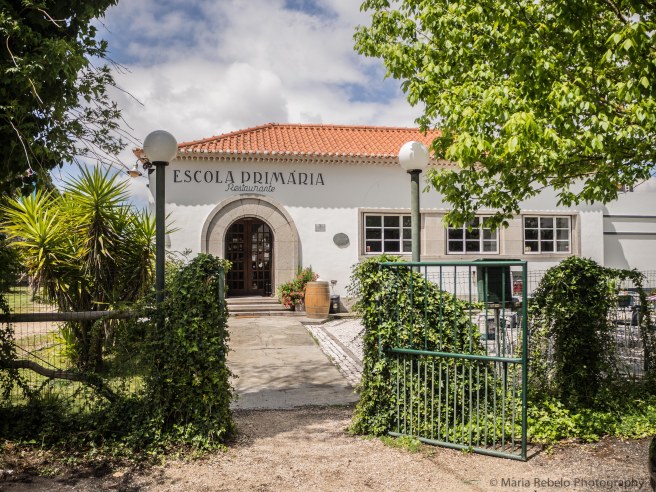 In 1940, the Portuguese government announced its “centennial plan,” a program to build a large number of primary schools. The schools in the north of the country, designed by Rogério de Azevedo, look austere with their granite and schist exteriors. The schools in the south, designed by Raul Lino, have graceful arches and whitewashed walls. Both designs used elements of the vernacular architecture and became integral parts of the Portuguese landscape.

With the number of children in decline, some of these schools have been closing. The school in the village of Cachopos near Comporta in Alentejo closed in the late 1990s but found new life as a restaurant appropriately called A Escola (the school).

The building is located in a beautiful woodland. Our arrival was greeted by the chirping of birds and perfumed by the scent of eucalyptus.

As we sat at the table remembering learning the three Rs, a plate of marinated rabbit and a carrot salad arrived. The menu has lots of great offerings, including cuttlefish rice with shrimp, fried eels, pasta with sea bass, stewed partridge, and rabbit pie with pine nut rice. The portions are generous and the food is delicious. A Escola is a great place to enjoy the simple, hearty cuisine of Alentejo.

On the school wall there’s an old map of the Portuguese empire. Those vast possessions of land and sea are long gone. But the empire of the senses–Portugal’s wonderful culinary tradition–continues to thrive.

5 thoughts on “A school lunch”

Isn’t it awesome when someone brings us a precious bottle of @niepoortvinhos port wine from @lamelas.restaurante a heavenly restaurant in Porto Covo?