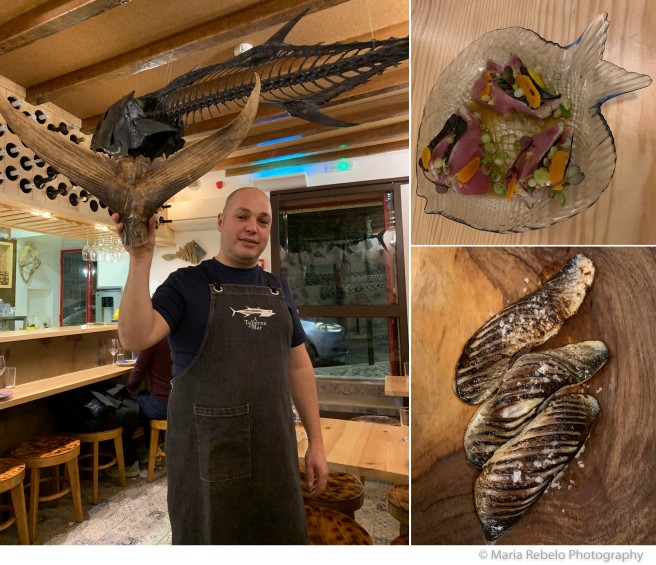 A dinner at A Taberna do Mar (the sea tavern) is a culinary plunge into the waters of Sesimbra, Trafaria and Costa da Caparica. These are the beaches near Lisbon where chef Filipe Rodrigues sources his fish.

Filipe was born in the Algarve. His grandparents were cannery workers who taught him some of the secrets of the sea. He discovered other secrets on his own, through years of hard work. After creating the menu for several popular restaurants, Filipe decided to open his own place. It is a cozy tavern with ancient stone walls and a quaint tile floor.

You can order a la carte or choose a menu prepared by the chef. Feeling adventurous, we went for the menu. The feast began with a warm tortilla decorated with cuttlefish ink topped with a cream of lupini beans, mint, and sea fennel, a plant that grows on sandy dunes. Then, we enjoyed a carob bun stuffed with dried horse mackerel accompanied by a miso mayonnaise. It came with a dumpling stuffed with tender veal tongue, seaweed and mushrooms. It was moist and delicious. We went back to the sea with a plate of sarrejão sashimi. Sarrejão is a fish from the bonito family that shines brightly when it is very fresh.

We were still savoring this delight when Filipe brought us his version of muxama. This prosciutto of the sea, made by salting and drying the best parts of the tuna, has been produced in the Algarve since Roman times. Filipe marinated the tuna in a mixture of soy and moscatel wine before he dried it. The muxama came with an exuberant combination of pumpkin pickle, sushi rice and a large shrimp from Algarve called “carabineiro.”

An appetizing bread seasoned with sardine sauce and a tasty mackerel soup came next. They were followed by xerem, an Algarve version of polenta, with berbigão and seaweed. Then the air filled with the aroma of grilled sardines that came from a tray where the sardine nigiri was being prepared. Our taste buds jumped for joy while the sardine melted in our mouth.

Filipe asked us whether we would like to repeat any of the items from the menu. We answered in unison:  yes, we would love some more sardine nigiri!

The meal ended with three desserts: a carob mousse served with tangerine sorbet, a bread pudding and a crème brulée where the milk was replaced with a berry puree.

A Taberna do Mar is a place where East meets West, where Japanese cooking techniques are used to recreate Portuguese flavors with delicious results.

2 thoughts on “The sea tavern”