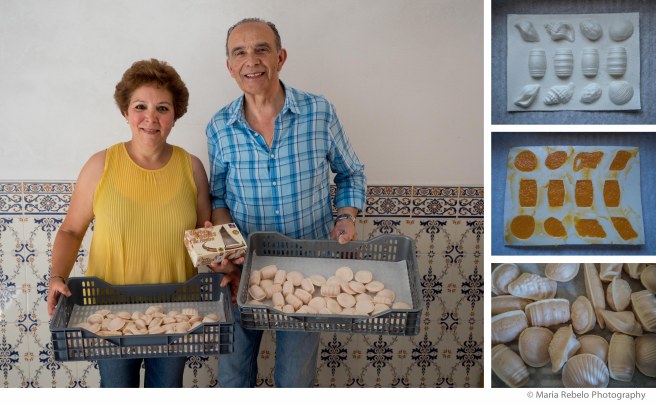 “I’ll take you there,” our friend promised. He dialed a number on his cell phone and asked “Can you show us what we want to see?” The answer was positive so we got into his car and he drove us to the outskirts of Aveiro.

We stopped outside an ordinary building, walked to the back door and rang twice.  Rosa Líria Soares opened the door. She greeted us with a welcoming smile, even though it was Sunday and she had been working since 6:00 am. Rosa is a legendary producer of “ovos moles,” an Aveiro delicacy.

It all started thirty years ago when a pastry store closed and the owners offered Rosa their equipment and recipes. She began making “ovos moles” and soon it became her full-time occupation.

We asked whether she would show us the secretive production process. She said yes, she would show us everything except how to combine fresh egg yolks, sugar and water to make the filling. “I won’t share that secret with anyone,” she said. “What if we promise not to tell?” we insisted. “The answer is still no,” she replied.

Rosa buys molded sheets with shells, whelks, sardines, and other designs from one of two producers in Aveiro. The sheets are made with the same wafers used for holy communion. Rosa fills two identical molds with her prized egg filling and moists the edges with water. The wafers are then placed inside a wooden mold and pressed together until the two pieces are glued.

Rosa’s husband, Henrique Carmona, arrived from their shop, Moliceiro dos Sabores, in downtown Aveiro. He told us with pride about all the awards that Rosa has won over the years.

Rosa offered us some freshly made “ovos moles.” “They keep for two weeks but they taste best in the first five days. And if you can try then like this, freshly made, they are even better.”

The crunchy wafer and the soft filling combined in our mouth and we stood there in silence savoring this lavish moment. “You didn’t like them?” Rosa asked. We explained that we couldn’t find words to describe these “ovos moles,” the very best we ever had.

“We dream about coming for a couple of weeks to apprentice with you, because something as sublime as these sweets needs to be passed on to future generations. Will you consider it?” Rosa took time to answer. And then she said “maybe.” We left with our palates full of sweetness and our hearts full of hope.

You can try the divine ovos moles made by Rosa Líria Soares at her store Moliceiro dos Sabores located on Rua dos Mercadores 4, Aveiro, tel. 234 421 776.